Book 33: Police at the Funeral by Margery Allingham

May 19, 2020
Published in 1931, Police at the Funeral is the fourth of the Albert Campion detective novels by Margery Allingham. 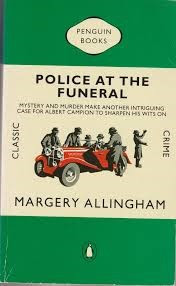 As I haven't read the previous novels and it has been along time since I read the only other Campion novel I have read, I don't feel equipped to comment much on Campion as a character, except to say that he's quite superficially developed at this point and he and Lord Peter Wimsey might well be first cousins: both are charming and aristocratic (although Campion's status is only hinted at by other characters - he is, in fact operating under an assumed name) and can look deceptively silly and vacuous when they want to, to the detriment of anyone who has to match wits with them. He also slips quite adroitly into a Bertie Wooster type role when he is trying to lull people into thinking him inconsequential and stupid.

Anyhow, the story is about a family of middle-aged and elderly eccentrics who live in a house belonging to a formidable old lady who is mother to three of them and aunt to one. They are all financially dependent on her and there is considerable dislike and hatred between them all. Living with them, as a kind of companion-helper-factotum, is a young niece-by-marriage who is engaged to be married to a friend of Albert Campion. When one of the family disappears, the friend asks Campion to soothe his fiancée's worries by looking into the matter, but then the missing man turns up dead and it is clearly a case of murder. Campion ends up moving into the house to investigate and uncovers all sorts of motives for murder. The solution is strange and unsettling and the twist ending is not entirely plausible, but Allingham's writing makes it fun to read.

This type of story is a staple of classic detective fiction: a crime is committed in a house full of secrets and shadows, but where it deviates from the usual setting is that the house is, in fact, not a manor house out in the country, but is situated in Cambridge and it is not impossible that an outsider could have committed the initial murder. It then veers back into the "closed setting/small group of suspects" trope with the second murder and keeps the manor-house trope more or less on track after that.

The characters are quite superficial, but if you know the types, you can easily flesh them out in your head while reading. The seething hatreds and loathings of some of the family for each other are quite plausible, considering the rigidity with which the household is run - Victorian era style - by the family matriarch. There is a big secret in the story, the revealing of which made me quite sad, but one could see that the attitude of the character over whose head the secret was being held was not the attitude of the author, but rather her hammering home the antiquity of ideas rampant in the house.

Allingham manages to write the house and its inhabitants in such a way as to create an atmosphere of stagnation and oppressiveness, and when you add the weird and unsettling events that take place there - including murder, strange behaviour, blackmail and threats - this novel would make a nice, light Halloween read, preferably by candle light. The rigidity of the routines followed by the inhabitants is reminiscent of the traditions and routines described Mervyn Peake's Gormenghast.
There are also a number of red herrings to make the plot even more convoluted.

Verdict: A satisfying read, but not one I'll keep or read again. I will, however, be sad to let go of the lovely cover.