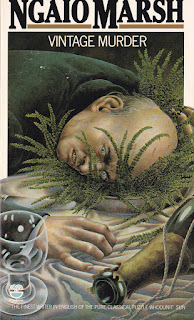 Since I have already posted about the audio version of another Marsh detective novel, Artists in Crime, which was read by a different narrator, I figured I would do one for this one as well, just to compare the narrators. There have been a number of different audiobook narrators for the books in this series, but Philip Franks and James Saxon have each narrated more of them than any of the other narrators and therefore I decided it would be interesting to compare their styles and techniques.

As I mentioned in the previous post, I was mainly happy with Philip Franks' narration of Artists in Crime, with the sole exception of his pronunciation of Roderick Alleyn's last name. His reading was even and the voices just different enough to tell them apart, and his pacing was good.

James Saxon, who narrated this book, pronounces Alleyn's name the way I have always thought it should be pronounced, i.e. the same way as Allen, which is good.

Saxon has (or rather had - he died in 2003) a different style of narration than Franks. He has good pacing, but there the similarity ends. For one, it is more stagey than Franks', i.e. he has a tendency to exaggerate too much.
He does make an effort to make all the voices distinctive, which is good, but he sometimes overdoes it. For some characters, he goes overboard and exaggerates too much. His interpretation of female voices is not convincing. For example, the voice of actress Valerie Gaines, one of the witnesses to the murder, sounds too much like the widow Twankey for this kind of book, and while his interpretation of a very drunk former actor, who is a key witness in the case, is entertaining, it is also completely over the top and too pantomime-like for my taste. It's not right for this kind of a detective novel, even if there is humour in it, because the humour is supposed to be subtle, not in-your-face.

I also feel that his interpretation of the New Zealand accent is more northern England than Christchurch. However, he isn't one of those narrators that made you regret having bought the audiobook (thank goodness for Audible's return policy), and you get used to his style after a while.