Book 29: The Venetian's Wife: A Strangely Sensual Tale of a Renaissance Explorer, a Computer, and a Metamorphosis by Nick Bantock 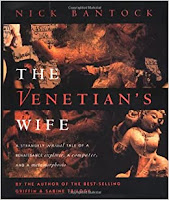 I first became aware of Nick Bantock's illustrated novels when I came across the first edition of Griffin and Sabine: An Extraordinary Correspondence when it was published in 1991. I didn't read them, however, until a few years ago, and found them beautiful - and the story rather superficial.

This story concerns a young art conservator, Sarah, who is lured away from her safe museum job by a mysterious man who only corresponds with her through emails. While she works on his behalf to reunite an old art collection on his behalf, his story unfolds and she undergoes a spiritual and sexual transformation.

Like Bantock's other books, it is beautifully decorated with the author's artwork, but is not as tactile as the books in the Griffin & Sabine and Morning Star trilogies, as the art is just printed on the pages and there are no fold-ins to unfold or envelopes containing letters to pull out.

The story is told more in text than in images, which means that the readers can use their imagination more to see things in the mind's eye than trying to decipher the symbolism and meaning of images. It is, like the previous books, written in epistolary form, but here it isn't just a correspondence, but mainly diary entries interspersed by correspondence. It also has mysticism and a love story in common with the other books.

I enjoyed the interplay between the text and illustrations, but found the story just as paper-thin as in the other books. I wish I could say this was a deeply spiritual story, a nicely sensual tale, a good mystery, a good ghost story or even an original ghost story, but no such luck. The spirituality is superficial, the sensuality isn't, the title gives away too much about the mystery, and the ghost-in-the-machine story has been done better by other, more skillful writers. It's the art and its relevance to the text that makes the book worth reading (once).

P.S. I am seriously considering cutting one or two of the illustrations out of the book to frame and hang it on my wall. (I looked for prints of them, but couldn't find any of these particular illustrations).