What's in a Name challenge review #3: West With the Night 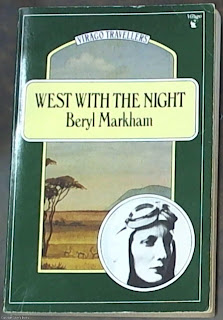 Beryl Markham was a remarkable woman. She grew up on a farm in Kenya and learnt to train racehorses from her father, working at that profession intermittently throughout her life and becoming a respected trainer. She also learnt to fly and worked as a bush pilot in Africa and was the first woman to fly across the Atlantic ocean by airplane from east to west.

West With the Night is a memoir about her life from childhood until after her record-setting flight, but could not be called a biography, because she only touches down here and there in her life and leaves much unsaid and unexplained.

The writing is lovely, flowing, graceful and poetic, with a strong sense of nostalgia. The text gives an interesting insight into the lives of white expatriates in Kenya in the first four decades of the 20th century. Anyone who has read Karen Blixen's Out of Africa will recognise some of the people mentioned, such as Denys Finch Hatton and Bror Blixen, both of whom were, apparently, her lovers. There's also a brief mention of Karen herself, but the few other women who are mentioned in the book are only briefly named and one gets the impression that Beryl was not overly fond of any of them except for one who was good to her as a child. I'm keeping this one, as I think I might want to reread it at some point.
--

After reading the book I became curious to learn more about Beryl Markham and found out how, after fading into obscurity, the book was rediscovered in the 1980s by a man who read a very complimentary passage in one of Ernest Hemingway's letters that described Markham's writing in glowing terms - and Markham herself as "very unpleasant". The book was republished, and the income from it improved Markham's financial situation so that she was able to spend the short time she lad left of her life in comfort after years of financial struggles.

The more I read about her, the more I have become convinced that she probably was somewhat unlikeable - being self-centered and full of a sense of entitlement - but she was also admirable because she clearly did not let herself be bound by what women were expected to be and behave like in her time and place, which may in part explain why she was considered unpleasant.Women who behave like men often are. I'm putting her biography on my TBR list - it just remains to be seen which of the two I will end up reading, Errol Trzebinski's 1993 book, The Lives of Beryl Markham, or Mary S. Lovell's 1987 one, Straight On Till Morning.