What's in a Name challenge category: A building. 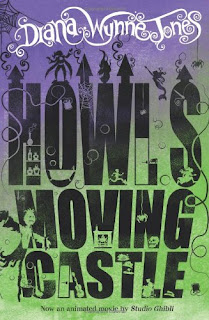 I have long been a fan of the Hayao Miyazaki animated movie of Howl's Moving Castle, but I didn't become aware that it was based on a book until the author, Diana Wynne Jones, died in 2011. I had never heard of her until I saw her obituary in one of the British newspapers that mentioned her as one of the great fantasy authors, so I went to Wikipedia to find out more and discovered that she wrote Howl.

I made a mental note to check out the book if I came across it, and then forgot about it until recently. I was browsing discussions on one of the online reading forums I participate in and found one about favourite books and authors that mentioned Jones and Howl. Since I was getting ready to place an order for some books with the Book Depository, I added Howl to the order. The books arrived in due time and the first one I picked up was Howl. I barely looked up until I was finished reading it.

Synopsis:
Sophie Hatter is the eldest of three sisters in a magical land, and everyone knows what that means: under the rules of fairy tales, she is doomed to fail in her quest for a happy ending. When the wicked Witch of the Waste casts a curse on her that turns her into an old woman, she sets off to find her fortune anyway and finds her way to the moving castle of the wizard Howl, where she begins to discover herself. But the Witch of the Waste is after Howl, and it's up to Sophie to help him escape the fate that the Witch has planned for him.

Review:
This is a charming and comfortable read, and I mean that in the best possible way. The story is a good mixture of humour and action, with plenty of little details thrown in for good measure. It is a children's book, which means that there isn't any sex and only mild horror near the end when the fight between How and the Witch ends, and every action scene gets resolved in a manner designed to thrill rather than frighten.

Sophie is somewhat of a mouse when the story begins: shy, timid and quiet, and it isn't until the witch of the Waste curses her to age into an old woman that she begins to find that she actually has backbone, determination and courage enough to strike out on her own and seek her fortune. She also discovers that as an old woman she no longer cares what people think of her, which she finds very liberating. She is a subtle and powerful witch, but has no idea of it until it is pointed out to her, but she has trouble using her powers because she is completely untrained.

The wizard Howl is an egotistical drama queen who is obsessed with his looks and loves having women fall in love with him but then abandons them for the next conquest. He is also a self-confessed coward and has a talent for slithering out of assignments and confrontations, but actually has plenty of courage when forced to face his enemies. At first he appears to be a complete narcissist, but over the course of the story he is shown to be caring and having a strong sense of justice, and this saves him from being a complete ass. He does not develop through the story so much as unfold, and he is still an ass at the end of the story - but a loveable one.

The background world in which Howl takes place is a vaguely England-like place, including the names of places and of people. No technology is ever mentioned, so one has to assume it to be based on pre-industrial England. There isn't a whole lot of world-building going on, but what there is, is internally consistent.