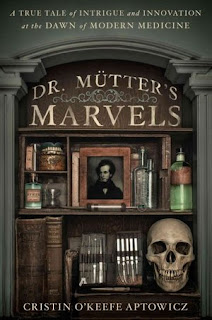 The 19th century saw many revolutionary changes in medicine, and Thomas Dent Mütter was one of the men who contributed to these changes. While he was not the one who actually discovered bacteria, he did teach his students at Thomas Jefferson University that cleanliness was important to the well-being, and indeed the increased likelihood of survival, of patients, and he also stressed treating them with sympathy. It seems neither of these things could be taken for granted at the time, and there are some gruesome descriptions in the book of major surgeries, like amputations and reconstructive surgeries on conscious patients with little or no analgesia, and also of the inhuman treatment of patients by doctors.

Mütter was also one of the first doctors in the United States to practice reconstructive surgery on a large scale and was a staunch advocate for the use of anaesthesia. His name lives on in the collection of medical specimens and equipment that came to form the core of the Philadelphia museum named after him, and his use of flap surgery revolutionised reconstructive surgery, especially the treatment of burn victims.

Aptowicz has taken this remarkable man and written an accessible, engrossing and interesting book that is at once a biography of Mütter and a glimpse into the history of Thomas Jefferson University and of American medicine around the middle of the 19th century. Every effort has been made to make the book readable and interesting to a non-specialist reader and the text flows gracefully - verging on the poetic at times - and I enjoyed reading it. I do not, however, have any wish to read it again, so it has gone off to a new home.

Here are a couple of other, more in-depth, reviews:
Kirkus Reviews.
NPR Books.