Full title: God, No!: Signs You May Already Be an Atheist and Other Magical Tales 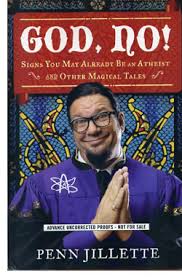 Side note: I have highly enjoyed watching the magic comedy shows of Penn and Teller on TV and have long had plans to see one live if I get a chance to revisit Las Vegas before they retire.

As an atheist I am interested in other people‘s reasons for not believing in a god/gods/higher power, and decided to start with a lighter read than I would get by wading straight into Dawkins or Hitchens (I have both on my TBR shelf). I certainly got a lighter read, but it really had more to do with libertarianism than atheism and consisted of Jillette‘s expletive-laden and sometimes bombastic pronouncements on this and that sprinkled into stories about his life, some entertaining, some less so, along with his version of the 10 commandments reworked for atheists.

Unfortunately I happen to disagree with many of the political views he expresses, even if we agree on the god issue, but I did find some of the stories in the book entertaining and even funny.

Oh, and I still intend to see a Penn and teller show if I ever go back to Vegas.