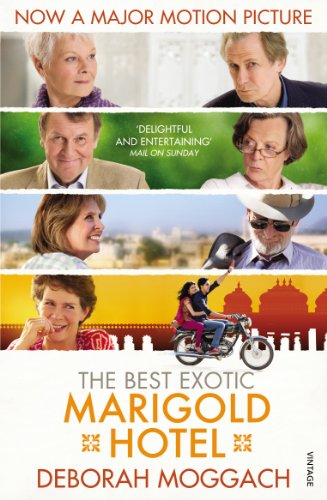 I don't know if I've mentioned it before, but I loathe movie tie-in book covers because I feel they are (often) trying to tell me how I should see the characters in the book. The edition of Deborah Moggach's These Foolish Things that I read takes it one step further and changes the title of the book into the title of the film version as well as having photos of the ensemble cast on the cover. Fortunately it has been a long while since I watched the movie, so I couldn't even remember who played whom in the film, and I think it's perfectly understandable to try to cash in on the movie's success by rebranding the book.

Even with a few years between watching the film and reading the book, I could see that the story had been altered, e.g. by having the Marigold Hotel's owner/manager be single and having a romance, instead being of unhappily married to an (understandably, I thought) shrewish wife. It also conflates Sonny, the wheeler dealer behind the retirement home scheme, and Minoo, the hotel's owner, into one character, and drops a few others and their stories. I have no quibbles about this, as I think the movie is actually more streamlined than the book, which is somewhat disjointed at times. There are so many stories being told in the book that one gets a feeling of whiplash from keeping tabs on the characters sometimes as the viewpoints often change quite rapidly.

The author does a good job of tying the different story strands together, but we see so little of each character that it's difficult to find the feeling of empathy for one or more characters I feel is necessary for the full enjoyment of a novel. The one character I was prepared to really like, Dorothy, is only presented as a viewpoint character in the first part of the book, and then pops up as a sort of side-note later in the book and is mainly seen through the eyes of the other focus characters.

I did love reading about India and how it affected the different characters.

I may add more to these reading notes as I think of them.